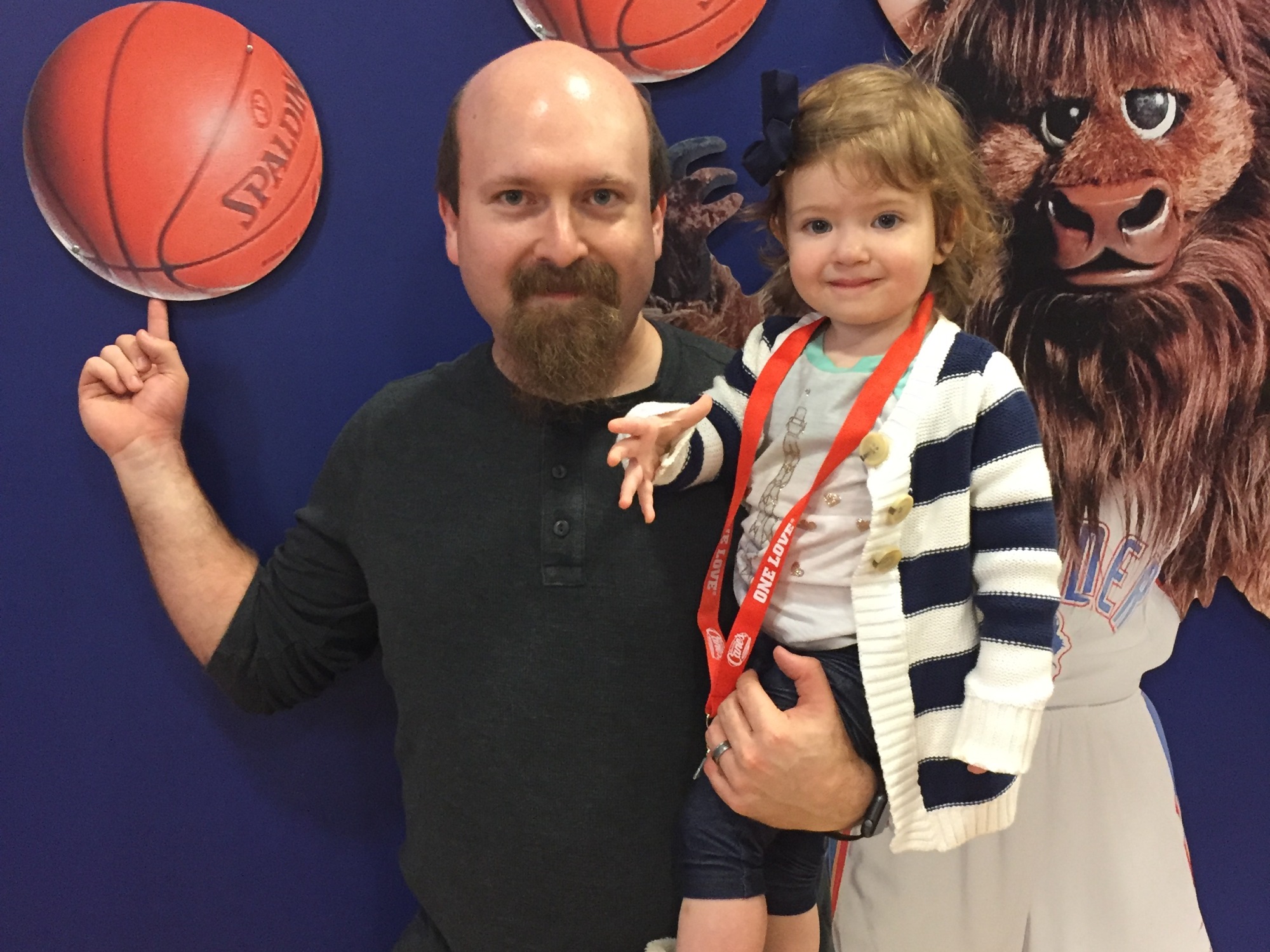 Some of my favorite memories as a child were made with my Dad at some pretty incredible sporting events. When we lived in Washington DC, we would go to Bullets games (now, the Wizards. thanks, P.C.-police) and see Larry Bird, Michael Jordan, Scottie Pippen and Dennis Rodman whenever they came to town. When we lived in Charlotte, we would go to Hornets games (before they moved to New Orleans) and we’d witness the speed of guys like Mugsy Bogues who would begin to shape the NBA into what it is today.

Naturally, now with two kids of my own, I want to take my kids to basketball games and create special memories of our own.

But my oldest daughter is four. Am I insane?

We started taking our oldest daughter to the games when she was only a few months old. She was free to get in, easily fit in our laps, and it was a great way to continue enjoying our favorite pre-family pastime without one of us having to stay home. Now, she’s four, and we’ve been to a dozen-or-so games with varying success. Sometimes she’s really excited to be in the arena. Other times, we last about one quarter – and that’s being generous.

So the question is: Can you take a toddler to a Thunder game and still have a great time?

The answer is: Yes – but you have to plan and prepare, and most of all have patience.

The hardest thing I had to learn when first taking my toddler to the arena is that as much as I wanted to watch the game and for her to show interest – she’s really only there because it was my idea, I drove her there, and I sat her in an assigned seat. Other than that, she probably doesn’t care that there’s a game going on, or that you have some sort of emotional attachment to the players and team, and the patience of a toddler is going to wear quickly.

So what do we do?

My daughter and I have a compromise. We are going to sit through the first quarter and a half, and then we’re going to go for a walk and play. After that, we’re going to come back for the last quarter. Here’s my game plan for how we not only survive without being mad at each other all night, but we end up having a wonderful time:

1. We arrive at the arena with only 15 minutes to spare before tipoff. This does two things. First, it ensures that we won’t be at the arena for a lengthy amount of time, which lessens the odds that we’ll make it to the final buzzer. Secondly, it’s the perfect amount of time to get in, use one of the family bathrooms to get that possible emergency out of the way, and grab a bucket of popcorn or cotton candy before we head up to our seats. And speaking of which…

2. We don’t go to our seats until after the national anthem has been sung and the players have been introduced. I learned early on that these two things are usually one of the louder moments during the course of a Thunder game – and if your toddler is like mine – loud = scary. So we hang out in the concourse until all the pre-game festivities are complete. As soon as the house lights come back on after Thunder player introductions, we head upstairs and have mere seconds to spare before tipoff.

3. Take advantage of the free entertainment that is spread out throughout the arena. As I said, the understanding with my daughter is that we will watch the first quarter and a half, enjoying our snacks and watching the game (and looking for Rumble the Bison). By the 6 minute mark of the second quarter, her legs are ready to get moving – so that’s exactly what we do. We walk all around the arena enjoying the free activities and entertainment there is to offer.

My personal favorite free activities are the photo booth (complete with costume options), face painting station, poster sign craft station, and Thunder Kids Zone. The Kids Zone is an area for any children in the arena to have a hands on experience and get them amped up about the sport of Basketball. There are arcade style free throw games, a small court with balls and a hoop, agility games and other interactive exhibits. It’s a great way to get some energy out before we head back into the arena to watch the rest of the game.

4. Don’t be a cheapskate – but don’t break the bank either. Sure, Thunder games can add up quickly, but there are so many options to get your child something that will make them feel special that won’t set you back too much. Before the game begins, I give my child the option to choose. She can have a bucket of popcorn, a bag of cotton candy or some nachos (because what kid doesn’t love cheese and chips). All of these options are right around the $5 mark.

One of the hidden gems, however can be found right outside of the Kids Zone, and that’s the Thunder Kids Snack Cart. Everything on this cart is $1, and the options aren’t anything to turn their nose at. Options in the past have included bottles of Minute Maid Juice, cheeseburgers and hot dogs, pb&j sandwiches and chips. We usually grab 2 “entrees” (a hamburger for me, a hot dog for her, etc), a dessert and a bottle of juice, bringing our total for the night’s snacks to right around $10. She’s full, I’ve had some snacks as well, and everyone is happy!

Talk about the plan. Come up with compromises. Give them things to look forward to. Exercise patience. Don’t go in with preconceived expectations. Know your child’s personality and limitations.

I absolutely love taking my toddler to Thunder games. Sure, some nights are more successful than other nights, but I find that more often than not – we’re creating some memories that will last a lifetime, and having a great time in the process. 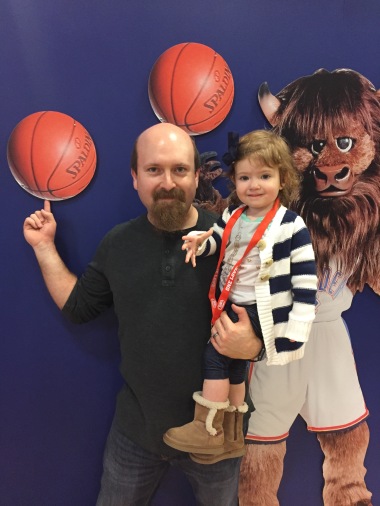 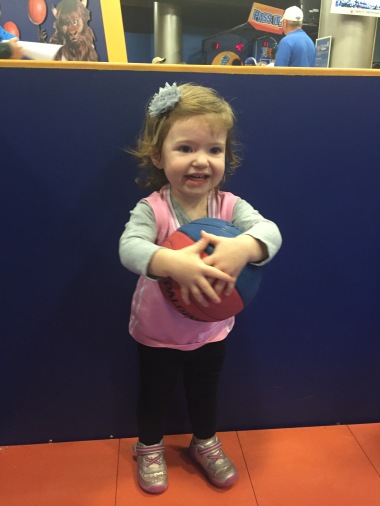 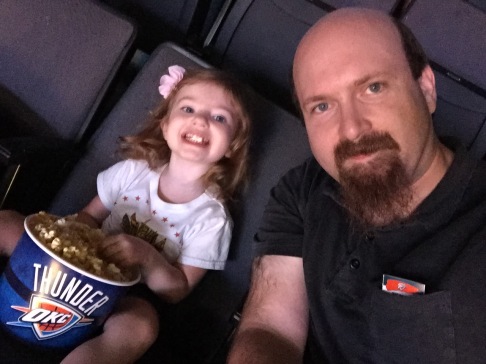 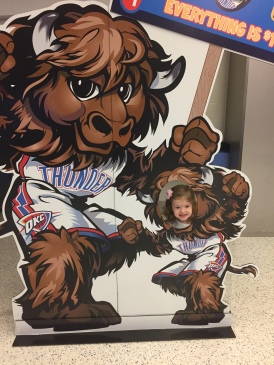 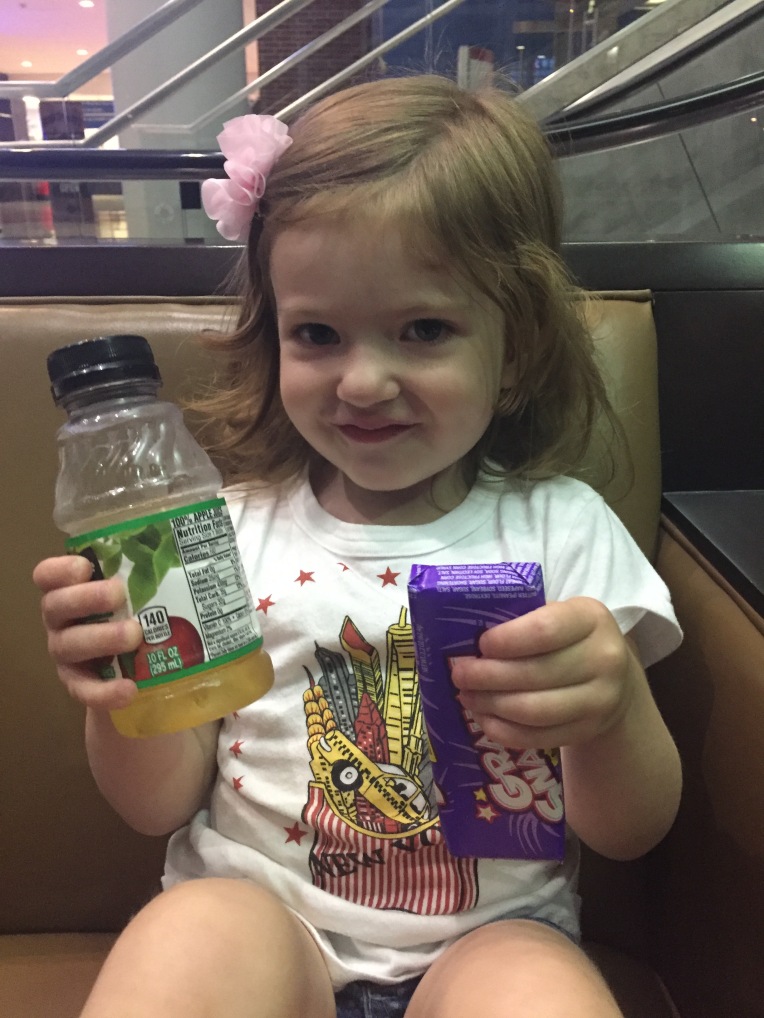